It’s hard to believe that with such a popular series, comic, and maybe a not-so-famous movie, there isn’t more on offer for an Avatar-themed birthday. Creating an Avatar-themed party that no one will forget is easy with a touch of DIY and creativity.

When it comes to invitations, you can use a printout and fill in the blanks, or you can get creative and turn it into an art project you can do with your little one.

If you’re stuck on ideas, remember that the Avatar is centered around the four elements, and you can use that to your advantage. It doesn’t have to be elaborate; it can be as simple as an arrow cut out with all the information. The choice is yours, whether it’s the colors or the different symbols for the nations.

When choosing your decorations, you may find it easier to stick to the elemental colors. Use red for fire, blue for water, green for earth, and yellow for air when choosing your balloons, tablecloths, streamers, and even the color of your snacks!

It’s easy to get a hold of some printouts and turn it into a family project by coloring them together! They will also come in handy when putting together your Birthday Banner. 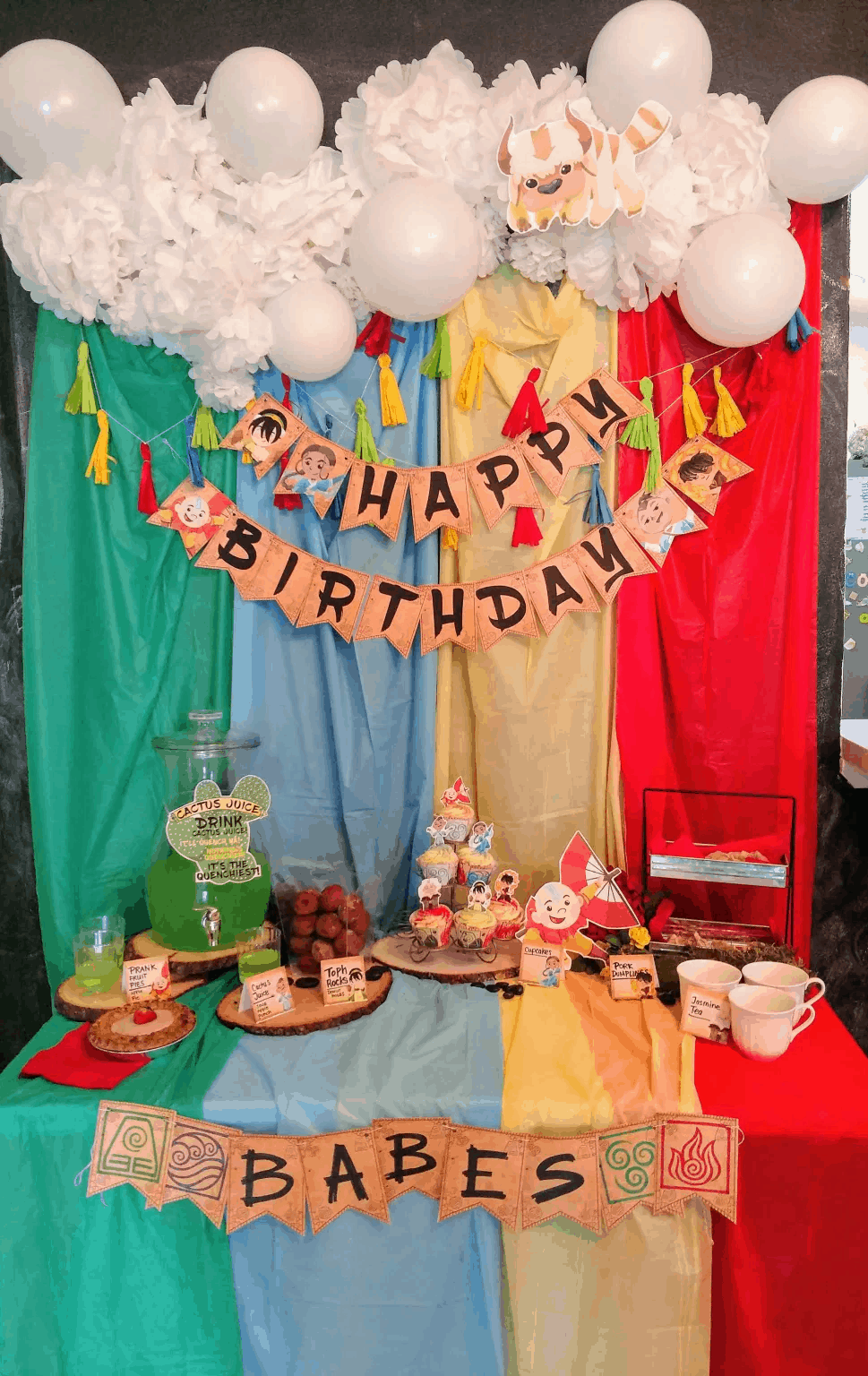 Using the white balloons and making your clouds out of tissue adds a lovely contrast to the different colors in the setup and gives off an airy effect.

What is a party without party games?! These are all based on the different elements, kiddie-friendly and safe fun. These games also help those kiddies burn off all that extra candy!

For these games, you will need red or orange plastic balls; they will be your fireballs. Line them up in the play area, which should be large enough to let them run around. For added effect, you can paint bright orange or yellow flames on the sides. Now it’s time to split the players into two teams.

On “Go!” Each team will race to grab its fireball. To knock out the other team, throw the ball at them; if the player gets hit, they are out-but if they catch the ball, the player who threw it is out, and another player can come back into the arena. Keep going until one team has won. The aim of the game is to have one team left standing or to have the most players left.

Air canons are pretty straightforward to make, and this video shows you how to make one and use it. All you need is an old bottle, a balloon, and some tape. Cut your bottle in half and cut the narrow end of the balloon off. Stretch your now-cut balloon over the bottom half of the cut bottle and tape it so it doesn’t become loose. Now, if you pull back on the balloon and release it, you should feel a rush of air coming out of the bottle.

Not only are they fun to make, but they are also fun to decorate. The little ones can practice their airbending skills on bubbles or small cups, just like in the video.

This game can get messy, so be prepared! You’ll need either a sandpit or a kiddie pool and fill it with sand; you don’t have to go overboard; just a few inches will work. Take a small army of plastic men and busy them in the sand; now it’s up to the kiddies to dig their way through and try to find them all.

Once they’ve got the hang of it, you can split them into two teams and turn it into a relay game. The game’s goal is to see which team can find the most soldiers, but each player can only retrieve one piece per turn.

Perfect for those summer holiday parties! But first, you need water balloons, a lot of them. Split the kids into two rows; the rules are simple. Throw the water balloon back and forth and try not to drop it. The pair must take a step backward for every successful catch until one side misses, and the balloon falls. When this happens, they have to start again. The pair that can go the longest without dropping or popping a balloon wins!

Everyone loves snacks, and here we have a few ideas for you to put on your birthday table! 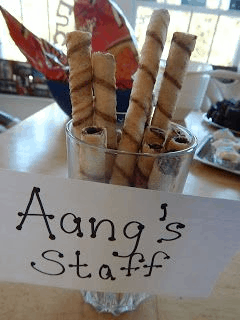 A simple yet yummy snack would be Aang’s staff, aka wafer sticks. They are a great snack that’s easy to hold and munch; you could even add some side dips like caramel or chocolate to add to the fun! 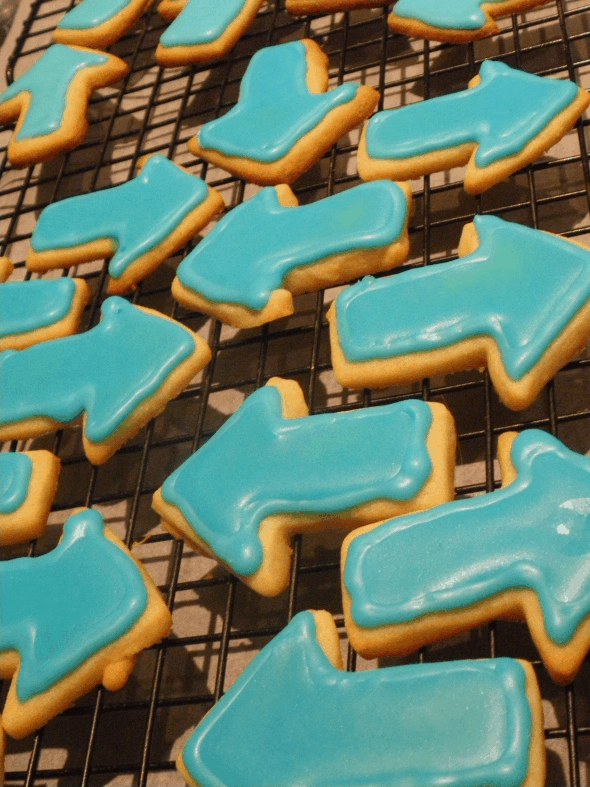 These arrow cookies are based on Aang Airbending arrow tattoos from the cartoon. The recipe is simple to follow, and the cookies are generous in size, although you can adjust if necessary. Though a small tip when doing the icing, outline the arrows first and let that icing harden; then, fill up the arrow. It’s also advised that you wait a day for the icing to set adequately, or it can get smudged and smeared everywhere!

Simple yet delicious! The cake can be your little one’s flavor of choice, with plenty of frosting! 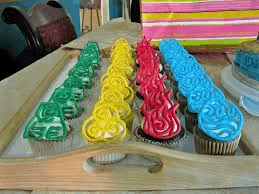 This is such a cute idea! Not only could each element be a different flavored cupcake, but it can also be less hassle than a large cake, with hopefully less mess.

We know how much the kiddies love their lucky packets and party favors; whether it’s filled with sweets, crisps, or even small toys, we all used to love tearing into one to find out what is hidden inside.

One idea that we found very resourceful and exciting is to take some Chinese take-out boxes and use those to hold your party favors, just like the image below: 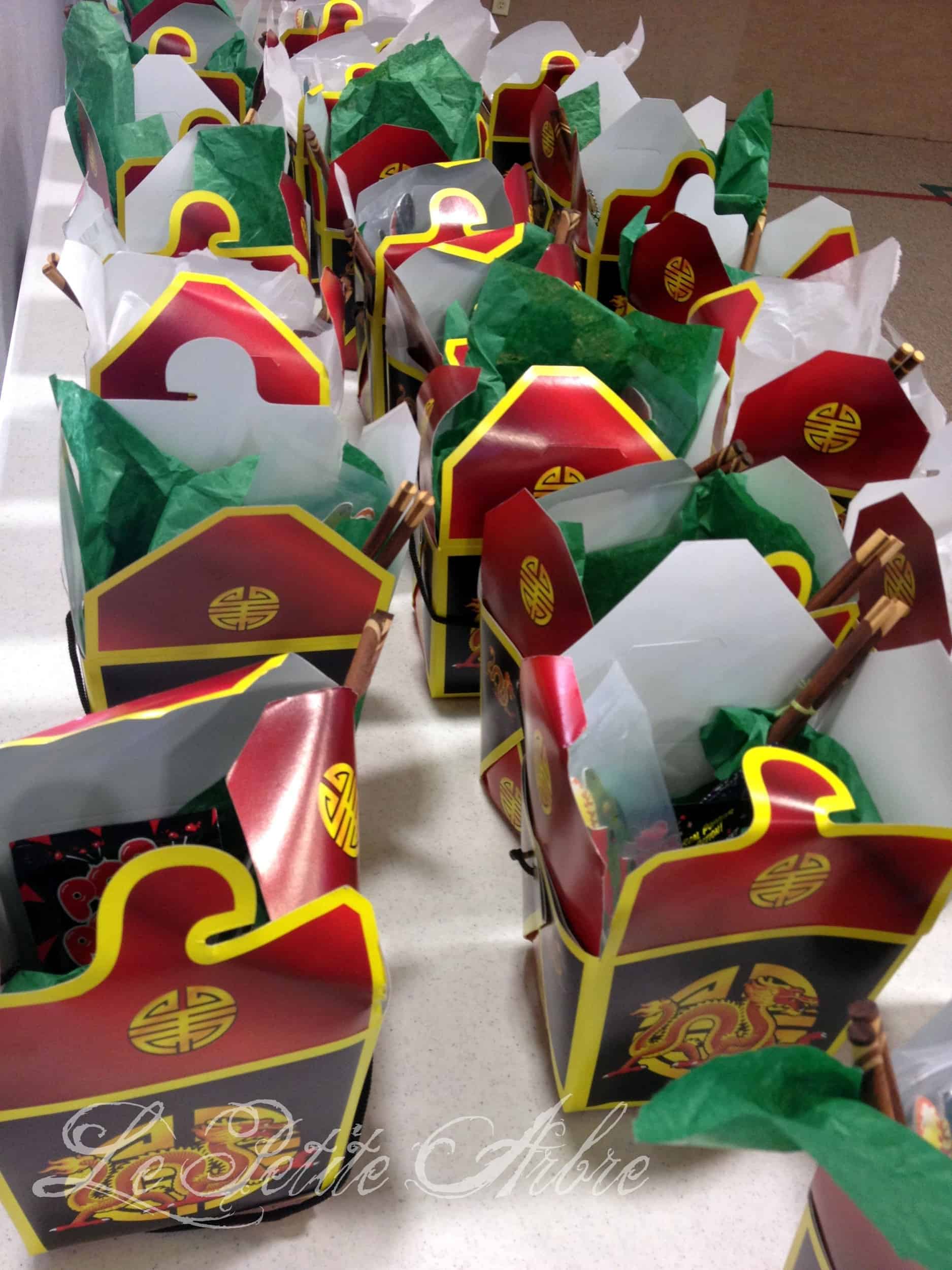 What goes inside these party packs is entirely up to you. However, it would be fun to fill it with something representing each nation or element. Fireballs would be a great way to represent fire, pop rocks for the earth, a yummy juice for water (or even water balloons if you want to mix in some toys), and light marshmallows or airheads candy to represent air. 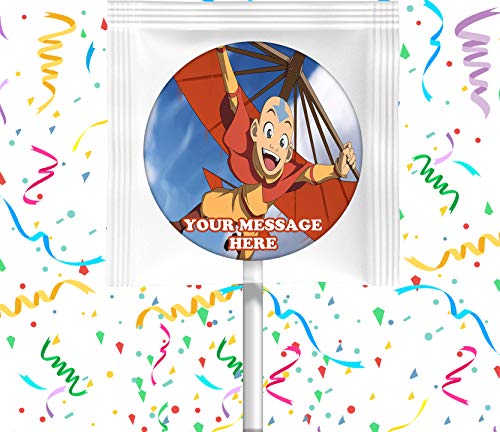 These lollipops are an excellent addition to your party favor packs. Each pack comes with 12 lollipops and a wide range of flavors like lime, watermelon, grape, peach, lemon, strawberry, tangerine, raspberry, root beer, and finally, blueberry. The fun doesn’t stop there; you can edit the image and add your personalized message of either birthday wishes or a thank you for coming.

Although it may not seem like there are many ideas for an Avatar-themed birthday, we have shown that you can create your own slice of Avatar’s world with a bit of imagination and a bunch of DIY.