When Frozen first came out in 2013, it took the world by storm, easily becoming one of the most popular children Disney movies of all time. Especially for young girls everywhere, it was one of the few Disney movies to show that the Princess can be her own hero and the power of a sister’s love.

Filled with magic, songs and filled with family fun! The characters are easy to relate to, whether you love the powerful Queen Elsa, her brave and loyal sister Princess Anna, or if you enjoy laughing along with the lovable and goofy Olaf.

By merging a Frozen theme with a ride-on toy, not only are you encouraging them to go and explore the great outdoors, allowing them to engage in physical fitness, but you’ve also added in a whole world of fun!

When choosing the right ride-on for your little one, there are three main aspects to consider: the safety of the toy, its stability, so your child does lose their balance and lastly, its durability as we know how hard children can be on their toys, and you want them to last as long as possible.

With these in mind, we have chosen some of the top Frozen Ride-on Toys: 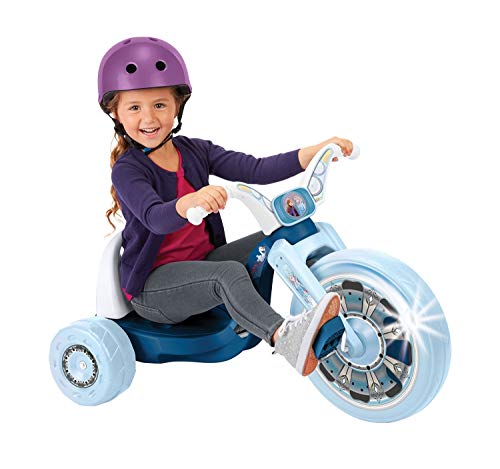 This tricycle is based on the popular Disney movie Frozen 2, the exciting and much-anticipated sequel to Frozen. The Frozen 2 Cruiser has a low-riding design, making climbing on and off the Cruiser easier for your little ones.

The large 15-inch front wheel not only helps to stabilize the Cruiser while out and about on it, but it also has a built-in LED flashing light that goes off as you ride the Cruiser. Understanding that children are forever growing and outgrowing their clothes and toys has made the seat adjustable so that the Cruiser may last them longer than most tricycles. 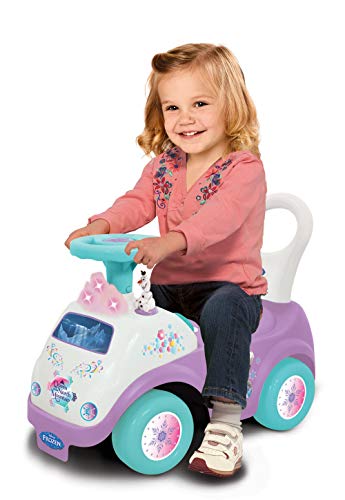 This is a great first Ride-on for any little one, and it features songs, lights, and an interactive dashboard. It has the much-loved song, “Do You Want To Build A Snowman,” from the first movie, Disney’s Frozen. The panel itself has many different sounds and lights, depending on which button is pushed; a fan favorite would be the small light-up Olaf the Snowman on the front of this ride-on. The buttons found on the dashboard can either be spun or pressed down, and they will play various catchphrases from all the favorite characters.

As a child’s first ride on, you would like to know that they can play with it safely. This is why they have added special features to increase the stability of the toy with the use of a rear bumper and their specially designed wheels. The rear bumper is put in place to stop the ride-on from tipping backward, and it protects your little one’s toes when they are pushing the car around.Check Current Price on Amazon 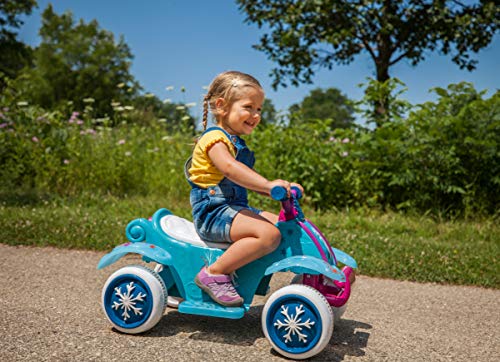 The Frozen Quad is an excellent gift for your little Frozen fan! This quad is a uniquely toddler-designed Quad with rubber traction on the tires to help keep their ride smooth and steady. It has been specially designed so that it’s easy for small hands to operate with a simple push-button drive system. It can reach a top speed of 1.5mph going forward, and a 6V rechargeable battery powers it.

To add to the fun of this quad, the design follows that of the popular Disney sequel, Frozen 2. Your child will be instantly drawn to this quad with an eye-catching light blue color and featuring your favorite trio, Anna, Elsa, and Olaf. Strong and sturdy, it can hold up to 44lb and is recommended for Frozen Fans aged 18 and 30 months old.Check Current Price on Amazon 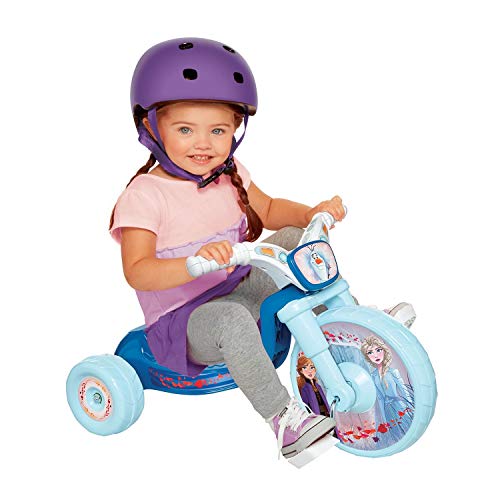 Designed with stability in mind, this is an excellent first mini scooter for your little one. Encouraging more outside play, the big 10-inch front wheel and the easy-to-grip handlebars ensure that your child has a safe and easy-to-ride Junior Cruiser. The Cruiser does require some assembly, but it includes easy-to-follow instructions and stickers from the lovable sequel, Frozen 2. These stickers have all of your little one’s favorite characters, from the Snow Queen Elsa and her sister Anna to the kind Olaf and even Gale the wind spirit!

The Cruiser also features a button that, when pressed, plays different sounds and songs from Frozen 2, giving your little super-fan something to vibe to while out and about. The Frozen 2 Junior 2 Cruiser can hold up to 35 lbs and is recommended for toddlers between 24 months to 3 years old.Check Current Price on Amazon 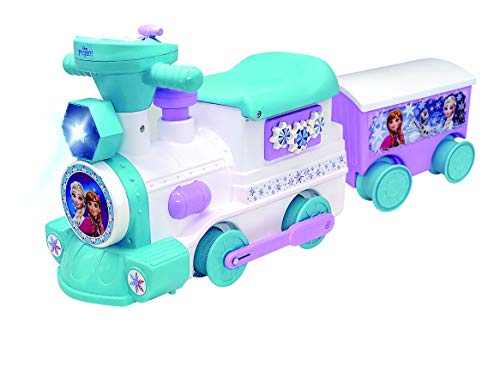 A different design from what we’ve seen before, this little ride-on toy comes in the form of a train with some tracks included. The train has its own set of tracks that you can set up in your living room or even outside. It is battery-powered and moves both forwards and backward with an added stop action.

The train has two cars, a front seat with all the bells and whistles and, a trailing car so your little one can store their favorite toys. The included tracks give you some creative flexibility; you set them in any pattern you want, whether it’s a figure of 8 or just a plain circle, the choice is yours. The front dashboard also has interactive buttons that make realistic train noises when pressed. The eye-catching color scheme is based on the movie Frozen. It features everyone’s favorite trio, Elsa, Anna, and lovable Olaf.Check Current Price on Amazon

This three-wheeled scooter has a realistic design and is made up of sturdy and durable material, made to last your Dinsey Princess fan many hours of fun. The three tires are made of plastic with a traction strip to give the scooter extra stability and make for a comfortable ride on many terrains. It features a comfortable seat and a 1-speed button forward control to give your little one more control. The scooter has a maximum speed of 2.5 mph. It is powered by a 6V rechargeable battery, which, depending on the terrain, can last between 2 – 4 hours.

The scooter has Frozen-themed details covering its blue body paint; they have included your little one’s favorite iconic sisters, the Snow Queen Elsa and her sister, Princess Anna. Some of the features include a comfortable seat, side mirrors, and lights to add to the realistic feel of this scooter.Check Current Price on Amazon 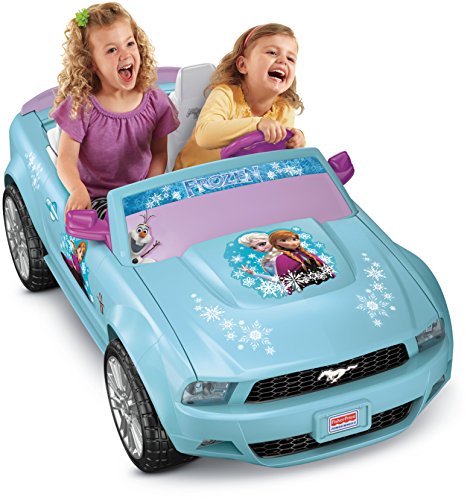 This mustang is any little car lover’s dream come true! Its realistic features, like the chrome wheels, how they have styled the dashboard, and incorporated the different colors and themes from the popular Disney movie Frozen. The built-in radio has songs from the film, and how better to listen to your favorite tunes than with a friend? The mustang has enough space for your child and one friend to tag along for the ride.

It has all the looks, and it has real-life functionality as well! This little Frozen-themed mustang can reach max speeds of up to 5 km per hour and can drive forward as well as reverse. For the safety of your little racer, the car features a Power-Lock braking system, which means that it will slow down as soon as your child takes their foot off the peddle. The wide tires are also able to grip both hard and grassy surfaces. At the same time, the body is made up of sturdy and durable material.

This stylish three-wheeled scooter is an excellent gift for any Disney Princess fan. Its theme is based on Frozen, featuring the famous trio: Queen Elsa, her sister Princess Anna, and the lovable, goofy Olaf. The base color is a light blue, with purple and white details, definitely eye-catching for any young girl. The windshield of the scooter lights up while playing three different songs from your classic fairy tales, and the seat has a pin cushion style to maximize your little one’s comfort when riding the toy.

The scooter can reach speeds of up to 2 mph and is easily controlled by the press of a pedal on the floor of the ride-on toy. The tires each have traction strips to make for a smooth ride, and the extra wheel on the back gives the scooter more stability than a normal two-wheeled one would.Check Current Price on Amazon

This little Ride-on is perfect for younger children, especially those still learning about interacting with their environment. The dashboard has many fun, interactive sounds and buttons that encourage your little one to engage with the surroundings. It also features an original song from the first movie, Frozen, “Do You Want To Build A Snowman,” which is well known and easy to sing-a-long to.

The front of this Ride-on has a small snowglobe that has both Elsa and Anna inside, and it lights up! Many of the small figures can move in some way, either by sliding or by pushing them down or turning them around. This little Magical Ride-on is suitable for those three months up to 1 year old, and it’s made from a sturdy and durable material, ensuring your little one has many hours of playtime.

There are many options on the market for Ride-on toys; each ride-on toy is designed with the safety of your little one as their top priority. They ensure that they will have a safe but fun ride, making many new memories with their favorite character from the movie Frozen.