The first time you lay your eyes on Roaring Tyler the Playful Tiger, it is like love at first sight, an answer to your prayers. Sometimes your kids yearn for a pet but getting a live animal is not a good option. That’s where Tyler comes in.

Tyler, is of course, not real, but he’s the next best thing. This interactive tiger responds to touch and sound most adorably.

He has a character all of his own. He has the cutest facial expressions and makes plenty of baby tiger noises. 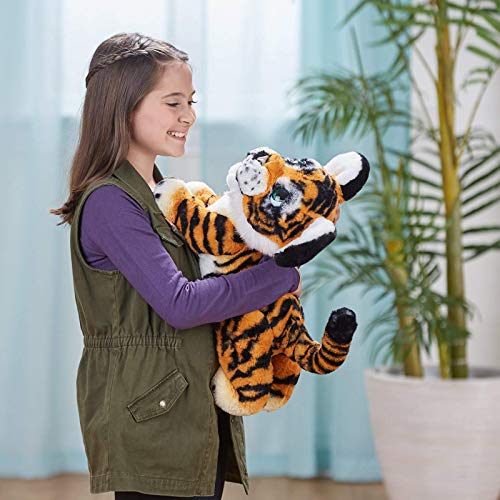 What to Consider Before Buying FurReal Tiger Roaring Tyler

Roaring Tyler, the Playful Tiger is designed for children four years or older. The tiger is rather large and heavy.

This is one of the reasons why he is suited to bigger children. Smaller children would benefit rather from a softer, lighter toy.

Although Tyler has a thick, soft pelt, his body is made from hard plastic, so he is not as cuddly as a stuffed toy, another reason why toddlers would benefit from a softer toy.

Tyler is an adorable tiger with a character all of his own. He can keep small children amused for hours, but beware – Tyler is prone to waking up and sometimes makes random noises that can become annoying.

In this case, you can switch him off and put him to bed using the on/off switch on his belly.

Looking for a similar toy with different but equally good looks. FurReal Roaring Ivory may be just what you want.

Lacking the interactive movements and sounds that Tyler is capable of, Ivory has lovely thick white fur with black stripes. 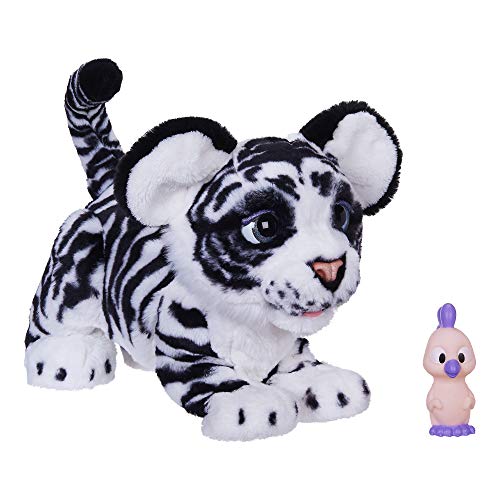 Her pink nose and expressive blue eyes are cute and appealing. She, too, comes with her favorite toy, a pink and purple chicken. If your child is hankering after a pet, Tyler, or even Ivory, maybe just what you are looking for. He doesn’t need feeding, but he interacts beautifully.

About Roaring Tyler, the Playful Tiger

Hasbro makes a full range of cuddly furry animals in the FurReal range. These are animatronic toys that move up and down on their legs without walking. These soft furry toys are not meant to form part of a shelf collection. They have been designed for interactive play as they react to motions and sounds around them.

You will receive the interactive tiger, his rubber chicken, and an instruction sheet when you purchase this toy. The instructions will help you learn to play with Tyler and teach you how to get different responses from your toy.

Tyler, like all toys out there, has his pros and cons. Here’s what we liked and didn’t like so much about him.

Imagine a furry toy that roars right back at you when you roar at him. Introducing Roaring Tyler, the Playful Tiger. This cute furry interactive tiger responds to touch and sound in more than one hundred different sound and movement patterns. He purrs, he sniffs, and he sneezes. This wide range of movement makes him appear to engage with his human friends.

He moves when he roars, giving him a playful aspect. He has his own toy, too, a little rubber chicken. When you press it, it squeaks and Tyler perks up his ears. Tyler will chew the toy when it is placed into his mouth. He has a whole repertoire of sounds.

Tyler has huge round blue eyes, and when he flutters his eyelids, he is sweet and lovable. The tiger will go to sleep when he is left alone for a couple of minutes. When he’s woken, he’ll yawn, stretch and blink the sleep out of his eyes.

Tyler’s body has plenty of sensors that enable him to react to your touch; he can move his eyes, tail, mouth and ears. His head moves, and his expressive eyes make him seem quite alive. Stroke his back, muzzle or forehead, and he’ll reward you with movement and sounds.

Roarin Tyler is the ultimate interactive toy, always ready for fun and games. When you roar at him, he’ll roar back. The louder you roar, the louder his response. When he roars, he bows down cutely and endearingly.

This is a fairly large toy – almost the size of a real tiger cub. From tail to snout, he measures about eighteen inches and from floor to head fourteen inches. He weighs about five pounds with the batteries in. He boasts soft, plush, short orange and black striped fur. His movable legs make him easier to cuddle.

The toy requires four size C batteries. They are not included in the pack, and you’ll require a small Phillips screwdriver to put the batteries in place. When you’re done playing with the tiger, you can switch Roarin Tyler off using the switch on his belly.

The FurReal Tiger is recommended for children ages 4+.

What’s in the box

Although a little pricey, this toy is really endearing and hit with children between 4 – 6.

He really is an adorable toy who will keep your young children amused for hours, and because he has such a wide range of movements and sounds, it will take a long time for your children to tire of him.